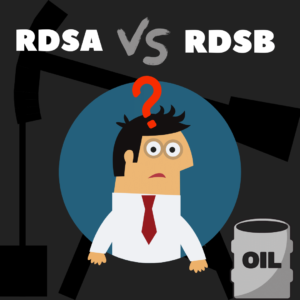 RDSA Vs RDSB what’s the difference?

There are a number of companies that are dual-listed i.e. their stocks are traded in different countries.

Let’s take Royal Dutch Shell for instance. It is a dual-listed company.

The A and B shares have the exact same voting rights, ownership stakes and dividends declared.

Which one shall I buy?

As a UK based investor, it makes economic sense for me to buy B shares as opposed to A shares. This is because the A shares being based in the Netherlands pay their dividends after deducting withholding tax of 15% for non-EU residents.

With Shell’s current dividend of $1.88 a share, this essentially means that A shares pay $1.60 whilst B shares pay the full $1.88. Most investors make the simple mistake of buying Shell A shares instead of Shell B shares.

For American investors, it would make sense to buy the US-listed rds.b instead of rds.a.

To see how much big a difference buying London listed RDSB shares as opposed to RDSA shares, let’s look at an example. Based on my existing Royal Dutch Shell shareholding.

I currently own 320 shares in Shell B shares (RDSB). For this, I get a total dividend of £360 a year. If I had made the mistake of buying Shell A shares (RDSA), I would have received only £306 in dividends a year as £54 would de deducted ins withholding tax. I would lose out on £54 simply by buying the wrong shares. This is huge and this is why it is important you buy the right shares in dual-listed companies.

Basically if you are a European Union resident, buying RDSA or RDSB shares does not make a difference. This is because there is no dividend withholding tax within EU countries so you do not lose out.

Other stocks with dual listings

Royal Dutch Shell is not the only company with a dual-listed listing in London. Other companies with Dual listing are :

In all the above cases, as I’m UK based it is more advantageous for me to buy the London listed shares.

This way I avoid paying withholding taxes on dividends and keep more money for myself.

This site uses Akismet to reduce spam. Learn how your comment data is processed.